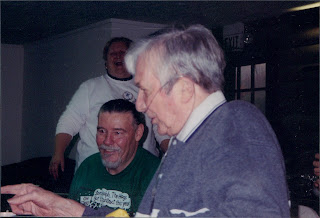 I did not know Papaw Birtcil very well. I'm not sure how many times in my life I got to visit with him, but it wasn't as many as it should have been. Papaw lived in Georgia and I lived in Indiana.

Papaw was actually called Papa by all of his grandchildren... except for me. For some reason, I felt uncomfortable with calling him papa. Papa, to me, meant Daddy. So, I asked him one time if I could call him Papaw... he told me "you can call me whatever you want.

Papaw worked and retired with Delta Airlines. Through the years, he gave me buddy passes so that I could visit him and Granny, and my Father Jack. Him and Granny helped pay for my Drivers Education classes and tuition to ITT Tech... which I ended up not going to.

Papaw was a very sweet man. I'm sad that I honestly don't know much about him. He was one of the first person's I know to use Email religiously. He also played card games on his computer. I remember playing Hearts with him a few times online when I was a teenager... he would usually win. Now when anyone says "shoot the moon"... I picture Papaw Birtcil. When I was stationed down in Georgia, I went to visit Papa a few times. A couple of those times were in the hospital. One time when I was alone with him in his room, I sang hymns to him. This was a very hard thing to do at the time, because I had never really sang solo in front of anyone.

Papaw died in 2001 when he was 70... I was 21. This was the first time I had lost someone I felt I knew well enough to feel a lose. I had lost some grandparents when I was younger... but the one I was closest to died when I was 7, and I don't remember a whole lot. The funeral was in Pennsylvania. I spoke at his service; something I felt unqualified for but also very honored.

Papaw had been married, divorced, and remarried. He had 3 children from his first marriage and 4 from his second. Grandchildren counted 17 and there was one great grandchild when he past away. 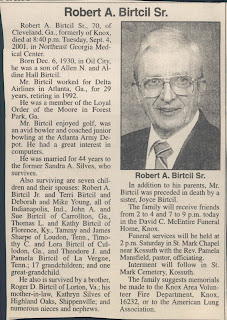 Posted by CM Stephensen at 5:39 PM