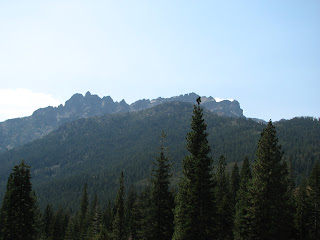 The Sierra Buttes is a Mountain Peak in the Sierra Nevada's in the Tahoe National Forest. It stands at 8591 Ft. High. You can see this glorious crag of a rock when you are driving down California Highway 49, right before you reach Basset's Station. It's really quite ominous when you first glance at it, and you wonder if any human being has ever been brave enough to scale this crazy mountain that looks like instant death.
When we had gotten home from out trip the Friday before, we had discovered by looking at our trusty map, that the mountain was called the Sierra Buttes. When we got home that night, I looked it up on the internet and found out that there are roads and trails that lead up to the top, where a Ranger Station has been built. We decided that our next day hike would be up that trail to the top of that mountain. One of the website's I visited talked about the crazy set of stairs which lead the last 60 feet to the top of the peak and the Ranger Station. Just reading about it made me have second thoughts. But we went. 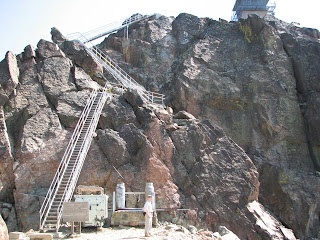 Our drive was nice. We decided to go up 395 to Hallelujah Junction and Drive to Graeagle, then take the Gold Lake Highway to the road that lead to the eventual trail. Four wheel drive vehicles can get pretty close, but you really need a truck, and not a Subaru Forester to get all the way up to the parking area for the Buttes. So we had to park our trusty little Forester because after a while, it would not have cleared the crazy bumps and holes in the dirt road.
The road up, till you get right before the parking lot, was really steep. We were stopping for breaks about every 100 yards and chugging down water, or at least I was chugging down water. We passed over the PCT, and saw some really gorgeous views even before getting to the top. It was neat to see, as you went up, how the vegetation would change so slightly and there would be more and more rock. It took us a little over an hour, I think, to get to the top where the bottom of the stairs were. 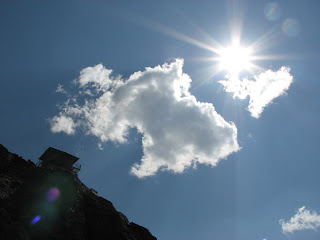 I never hyperventilated before in my entire life, but there have been a few times where I could feel that I almost could. Starting to go up these crazy stairs was one of those times!! There were 3 sets of stairs, all mounted into poured concrete. Climbing up the stairs, I had both hands gripping the rails and I was not looking to the right, left, or down. Just straight at the rock wall I was facing. The third set of stairs is a bit more scary, since there is about 20 feet of nothing between the stairs and the rock, and nothing but air on the sides. I had to stop for a few minutes to build up the courage to keep going. Steve was behind me saying, "go already", and here I am picturing my foot slipping and me falling through the crack to the rocks below. What was I THINKING????!! 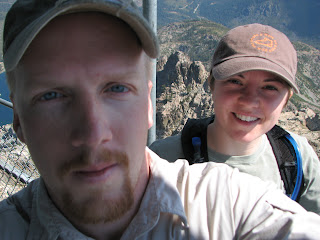 Once we got up, it took me a little while to get a hold of myself and feel comfortable even on the solid ground. It's weird to have that feeling that you may fall off. I remember praying out loud, "Father, please don't choose to let there be an earthquake here right now!" 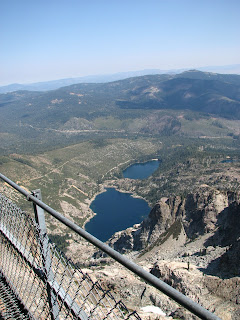 It was great, I'm really glad we got to go up. We were pretty lucky because we didn't see anyone on the trail or at the tower until right before we got down to the bottom of the stairs again. The trip down the mountain was pretty fast, though a bit hard on the knee's. I got all my pictures going down, since we weren't worried about simply breathing like when we were going up. 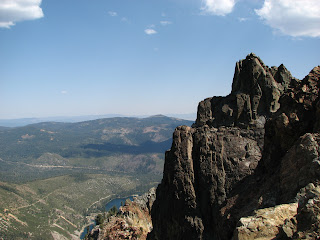 Afterwards, we stopped at Basset's Station, a place Steve's grandparents had taken us to for dinner and lunch a few times. We both had Blue Cheese Hamburgers, Steve had a milkshake, and I had some Blackberry Pie. Man were we hungry!!!!
Posted by CM Stephensen at 3:42 PM

I'm always down for a good hike, but that would freak me out. I love that you were praying for your life, it made your story great. That seems so like Steve to tell you to go. HA. Tell steve I say hi.

Yeah... that wasn't the only prayer I offered out loud! It was so worth it though... you would go!