Wow, we have had a lot of snow this week. I really love making a snowman when there is a lot of snow. The last time snow we had, I felt too tired, but this time I decided it was something I needed to do! So, on Tuesday, we put on all our snow gear and headed outside. 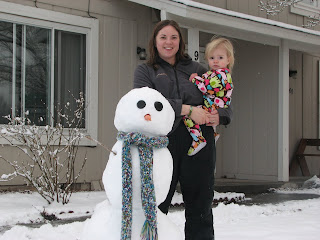 Abby didn't really stay happy very long outside. She was pretty whiny for a while. It took her a bit to get used to the snow all over the ground. I like to keep tracks out of my snow, so I will try to limit where I step in my yard... to make our snowman, I used the snow from the side yard and the driveway. 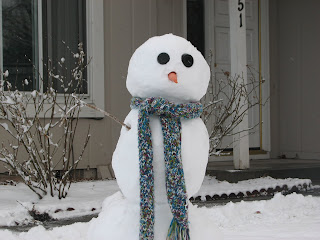 Abby decided she was done before the snowman was done. I let her go inside while I finished up, but of course she didn't want to be inside if I wasn't there. So she played around a bit on the porch while I put the finishing touches on our friend. We went inside and I grabbed a carrot, the scarf, and two lids from spice jars that made great eyes. 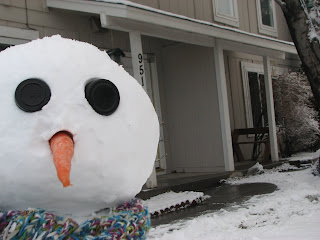 He's the cutest snowman I have ever seen. He has no mouth, which I kinda like... and he only has one arm... I couldn't find another stick. I went back in and grabbed the camera to catch some good photo's. My hubby got me a cool bendy type camera stand, so I was able to place the camera on the mailbox to get a few shots with Abby and I with our snowman. 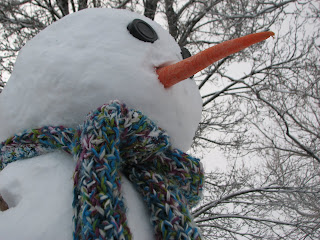 He is a very contemplative fellow... don't you think? I love his nose, and the scarf really brings out his white complexion. I've thought in the past few years, that it would be awesome to have a reusable snowman kit, with pieces for eyes, mouth, and nose that you can just use over and over every year. I've seen a few online, but have never bought one. 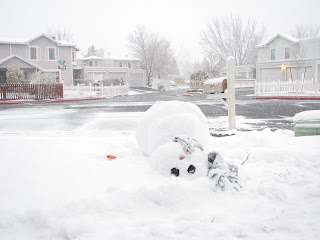 After we went in the house and got comfortable, I went to go take a peek and our snowman friend. When I looked out the window I was disappointed to see that he had fallen over. Upon taking a closer look, I discovered tracks leading from the sidewalk, into the yard, right up to my snowman and then leading away. It was appallling and infuriating to learn that someone had murdered my snowman... and I had just finished him not even 40 min before. Luckily I didn't see the punk who did it!!! And even better... I have the gift of resurrection, so I went outside and put him right back up!
Posted by CM Stephensen at 10:27 PM